A little rain and cooler days meant I wore my coat from the 2010 Olympics for the first time in months. I had forgotten how wearing the bright turquoise labels you as a volunteer. The girl behind me in the Starbucks line asked where I worked during the Games. With a little bit too much pride in my voice I told her I was with the Opening and Closing Ceremonies. She countered that her position as parking attendant meant she got to see many of the athletes pass though her checkpoint. I smiled and gave a nod. I’m sure even that seemed condescending.

Back then the camaraderie that permeated all the people involved with the Olympics was hard to define. That same spirit went even farther and permeated most Canadians. We were all on the same team and uncommonly proud.

It was like some drug was woven into those red mittens, cool hoodies and volunteer wardrobes. A chemical that made us all love each other and stand together.

There is nothing like defending your home turf against an outside force to build bonds and friendships that never seem possible in times of peace.

We were welcoming the world into our home and then collectively kicking their asses.

And we Canadian’s loved every minute!! I bet the rest of the world craved the drug we all seemed to be on.

This election has gone on too long and we are being torn apart. I hope whoever wins on October 19th has the chance to lead Canada when we are again standing back to back and looking out. When we are all united in something bigger than our differences and squabbles. When we are reminded we are more alike than different.

And it’s going to take something much bigger than one hockey game or giant slalom to reverse the hate.

I bet Elizabeth, Justin, Stephen and Thomas all still have red mittens at home. Yes, even those four are all more alike than different.

And to that girl in the Starbucks line up… I’m sorry if it seemed that I was dissing your Olympic legacy. The simple fact is we were on the same team and that makes us not only equal but part of the same family. 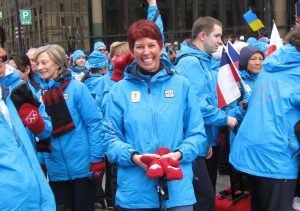