The noise was a little creepy. And it was always there in the background. I asked if the squirrels made the sounds all night long. “No, they must sleep at night because we don’t hear them… well maybe a little bit, but that’s OK. The babies are getting bigger and they’ll be gone soon.”

A family of squirrels had invaded my client’s attic. The friendly pest exterminator had confirmed the breech. He had the ways and means to get rid of them effectively. My client was distraught with the thought of killing the babies. She just knew they must be awfully cute. Luckily her husband also had a soft side. Even better, the pest-man had another option but it would be timely and expensive.

Let the squirrel family keep their happy home until the kids were old enough to make their way outside. Once all were able to take care of themselves the attic would be closed up. The process was long and involved and took a special trap door and constant checks on the little family. A costly affair.

So for far too many weeks, during our training sessions, I could hear the critters scurrying around and running amuck above us! Wendy just laughed and said she imagined Mama Squirrel up there looking after her children.

Wendy always mentioned that her husband was good to finance the endeavour.

And indeed he was.

Before everyone grew tired of the squatters, Mr.Pest-man came back with the proclamation that the family had vacated the nest and he would block up the entrance. Mission accomplished.

Few people heard of the kindness. Casual conversation didn’t lend itself to, “We are housing a family of squirrels for the summer.”

Less than a week later a card arrived in the mail…

I guess someone was watching… or maybe squirrels are a little cleverer that we suspect. 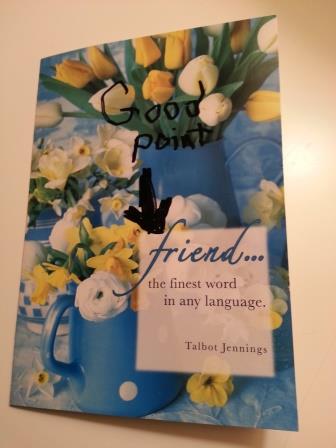 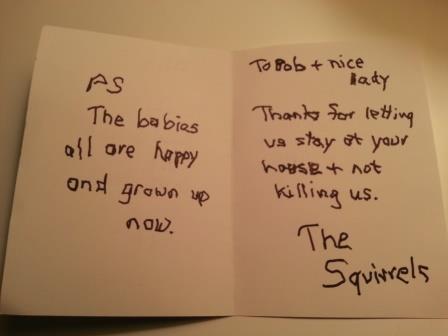