Why do others get to decide when “too much”, isn’t?

I have never understood this premise.

An aspect of my personal trainer life is working with people with terminal illnesses. I bet you didn’t know they sometimes hire trainers. Odd but true. Why wouldn’t a person want to be at their best for as long as they can? It’s just human nature.

And it gives them some control.

“Can you keep my arm strong enough for just a little longer?”

This line of work allows me to know people like Elayne Shapray. And through Elayne I have met some people at “Dying With Dignity”. Elayne played a big part in the effort that led to the Supreme Court making the unanimous ruling that gives people the right to assisted dying.

So a done deal, correct?

Even though the Supreme Court said it is a human right, the issue is still being debated?

The Supreme Court gave the law-makers until February 2016 to make this happen so we must be close to giving people their rights back?

This makes me crazy.

And it makes me show up at the rally today in downtown Vancouver. Some very reasonable people spoke about the need to push forward to ensure the Supreme Court ruling is put into practice. 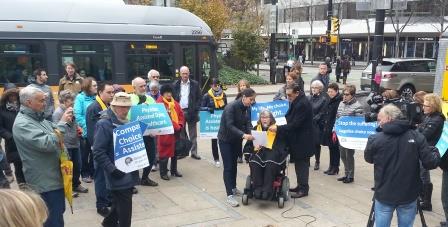 No more lip-service. No more delays. Nor more hiding behind lame excuses.

The people I have helped die deserved so much more.

We owe the people in need so much more.

It is their right. 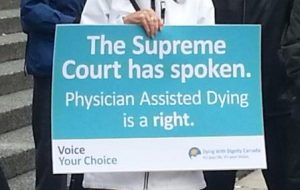