I love flourishing. Maybe this is the best proof my family is from Scotland.

At any bagpipe band performance my eyes are transfixed on the tenor drummers and the wild gestures they do with the mallets… the flourishing. They spin them around and wave their arms in a choreographed dance.

A large group of us gathered together up at Simon Fraser University to listen and watch the SFU Pipe band with their final rehearsal before heading to Glasgow for the World Championship.

1. How lucky we are to have this world class band right here in Vancouver. Some people wait months and years to hear them play and I only had a thirty minute drive that included a stop at Starbucks.

2. The band members look very different when not in their kilts.

3. Bagpipes sound perfect when played outside on the top of a mountain (even though these ones, played by the best in the world, would sound perfect almost anywhere.)

4. I do love flourishing.

After the rehearsal, the band started to pack up their instruments and the audience milled about. Sitting on the grass, a little away from the group sat a tenor drummer. I almost walked by but stopped.

“When I watch the band play I always watch you… I think you’re the best… I’m a big fan of the flourishing.”

“Thanks…” then he gave a shrug, “Thanks for saying that.”

I could tell there weren’t too many of us flourishing fans around, and even less who admit it.

His name is Mike O’Neil.

You know what I’ll be watching. 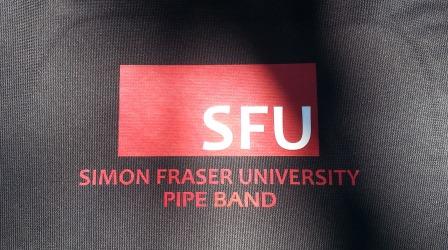