It’s human nature to want to be seen and heard by the people we love and admire. We want to feel we matter.

On Friday I was able to have a personal blessing by His Holiness the 17th Karmapa. He’s one of the leaders in the Tibetan Buddhist world. I consider him my guru. The anticipation about being close to him and having a one-on-one moment, even if it was just for a few seconds was overwhelming. As I waited in the line with the friend that introduced me to Buddhism you could see the excitement building. Could I look any happier? 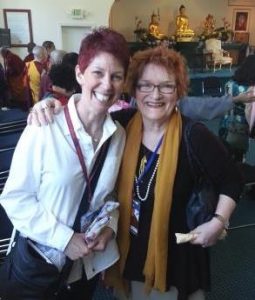 Then His Holiness walked into the room. He gazed out at the long line of people waiting to have a moment with him. 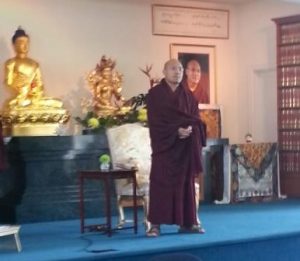 I was one of the first in line and walked up to him with my head bowed. Then I looked up into his eyes and smiled as he handed me a blessing cord. He smiled back.

A few hours later, at his next event, I found myself seated right up front. As he gave a talk about living a better life I felt he was looking right at me. Later I would ask others if they had the same sensation. If you are close enough to Karmapa does it always look like he recognizes you? Is that part of his power? Is that part of the gift he gives us? 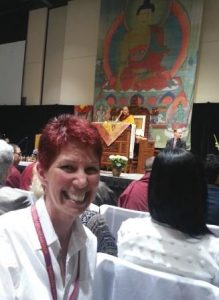 As Karmapa gets ready to talk I take a picture… 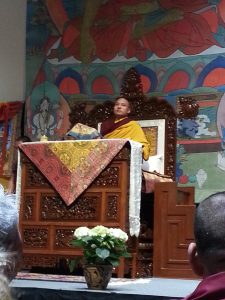 Does he see me?

That night I reflected on my great fortune. He really saw me.

Saturday was Karmapa’s final day of his two month long American tour. He was heading home. The crowd at his last event was waiting to hear his final message to us all.

At a lull during a break I found myself next to a man that was in the room for the previous day’s blessings. I commented on how lucky he was to spend so much time with Karmapa. He recognized me.

My bubble was about to burst.

Karmapa is not prone to a happy smiley face. His look is more often stoic and stern. His smiles are rare.

Apparently when I got close to Karmapa my head was bowed so I was oblivious to what happened, but when he first saw me he gave quite a look of surprise. I was told it seemed he was shocked by the colour of my hair. Then he smiled as I looked up at him and he gave me the blessing cord.

And as for me thinking he noticed me at the public event. Now it’s more likely that he just noticed my bright red hair! That’s certainly not the connection I hoped for.

We all want to be seen by the people we love and admire.

His Holiness the 17th Karmapa