It was pretty obvious what I would be writing about for this week’s blog. What I didn’t know is how the topic would make me think and feel.

Saturday night I went to the Balding for Boney event. It was a concert put on by the SFU Pipe Band to raise money for the BC Cancer Foundation to honour Andrew Bonar. Andrew, or Boney as everyone calls him, had emergency surgery back in November to remove a brain tumour. His story is horrendous and it’s best to hear the tale straight from the man himself, https://www.pipesdrums.com/article/andrew-bonar-in-his-own-words/

Boney is one of the iconic people in the piping world. And when I say world, I really mean world. This guy is famous and deserves all the attention he gets.

Knowing all of this I went to the concert. Along with everyone else, I was gleefully aware that pledges were being made to entice the SFU Pipe Band members to shave their heads. The more money that came in meant more people would have to go under the razor. (Insert evil laugh here.)

The concert was what you would expect from one of the world’s best pipe bands. To double the entertainment value, the Heather Jolley Dancers were also there to wow us. The added benefit was that two of the youngest members are Boney’s children. Yes, the concert was sold out. And yes, hundreds logged on to the live-streaming on the internet.

So I watched and listened and thought. I scanned people’s faces for answers. I eavesdropped on conversations to get reactions. I searched for clues. What was going to make this fundraiser different? What touched my heart? What touched theirs? What would touch yours?

In the end it was the little things that still echo for me.

The way Boney’s kids hugged him after they danced.

The way people with shaved heads seem to look alike. (Well especially if they are all wearing the same t-shirts and kilts.) But maybe it had more to do with the bliss that oozed out of each of them. There is a brotherhood in joining together and stepping up to do the right thing.

The way Boney’s voice cracked during his speech as he thanked his doctor. In that second it wasn’t about music or dancing or raising money to fight cancer.

It was about one man saving another man’s life.

And for that we were all grateful. 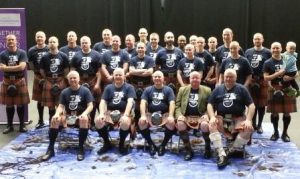 Boney is wearing the green blazer…

They Scare Me Change
Scroll to top