Twitter must be wrong, there is no way Fred could be dead, no way.

In the mid 70’s I was a chubby, acne-faced, broken teenager and Fred Latremouille’s biggest fan. When Fred was on CFUN in the afternoons I was always listening. My world revolved around him. I phoned into his show almost every day and more often than not he put me on the air. Too many times I played hooky from school and made the trek across town to sit in the studio and watch Fred live. The vice-principal at my high school told my dad that sometimes he only knew I was still around was because he would hear me on Fred’s show. Dad was not impressed but my family made concessions around my obsession. We would not sit down to eat until Fred’s show ended at 6pm. Once Fred signed off the air I was free to come to the dinner table.

I was Fred Latremouille’s biggest fan.

Fred showed me a kindness we always hope for. A kindness rarely seen, a kindness beyond explanation, a kindness that showed the depth of who Fred was. It’s a kindness most aspire to have but rarely own. Fred’s kindness redirected my life.

Through twists and turns I morphed from the avid fan to the professional colleague. Fred was always there. He was greatly admired by most at the broadcasting school I attended. He was a close friend of my boss at the recording studio where I got my first professional job. He was the voice I hired when I produced the Kokanee Beer ads during my years at the advertising agency.

The last time we spoke it was about a health concern Fred was dealing with. By that time we had both left the broadcasting world. During the conversation Fred remarked that it was funny we had kept in contact all these years. “Who would have thought?”

After that last phone call I sent Fred a note thanking him. I wanted him to know that deep down inside, the chubby, acne-faced, broken child was grateful that the famous radio star, Fred Latremouille, had always treated her like a cherished friend.

Every once in a while you reflect back on your life and the decisions you’ve made.

Opting to be Fred Latremouille’s biggest fan was one of my best. 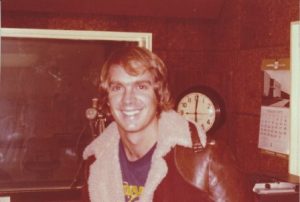 A visit with Fred at CFUN