As I drove away I thought, whose running this place and what just happened? It was like I entered a realm where all the people acted the same way. Did they all drink some weird concoction to make them alike? Were they hooked into the same mystical wavelength?

Or were they just smart people with a common goal to deliver outstanding customer service?

Two separate mechanics spent more time telling me how difficult it would be to fix than actually finding and solving the problem. No one really tried. No one really cared.

Then I went to Destination Mazda. At the front entrance a man opened the door and greeted me. I assumed he was being nice because he thought he could sell me a car. Oswald, the man checking me in at the service desk, was overly smiley. He didn’t know this was a difficult case. He asked Darryl to go for a ride with me to hear this rattle.

Darryl had the type of aura that gave the impression he didn’t have a care in the world. He sat in my car and was overly calm. I was nervous and scared. Darryl was my last hope.

So we drove. And the car didn’t make one squeak.

So we drove some more. Nothing.

With a voice that had not given up hope, Darryl directed me to a little street a distance away. One circle of the block and the rattle sounded! Eureka! We went around and around as Darryl listened.

We got back to the dealership and Oswald was still smiling. Before I knew it a young man was giving me a ride home while Darryl dealt with my car. Four hours later he returned to pick me up. “All part of the service.”

My car was fixed… the rattle was gone. And it wasn’t going to cost me a penny.

Each person at the dealership seemed genuinely happy to help me. Is this what real customer service looks like? I think so.

How do you thank people for being kind and helpful and caring? I bought them some cupcakes. 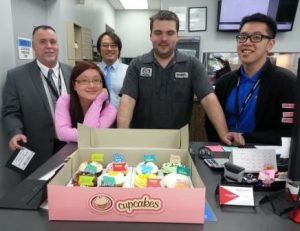 Darryl is eying which cupcake to choose and Oswald is smiling from behind.

I would have done something more but the other kind and helpful and caring people I know were dealing with an earthquake and I was needed there.

So I drove my quiet car to the Monastery to see what could be done for the temple and children’s school in Kathmandu.

I hope Darryl ate two of those cupcakes. 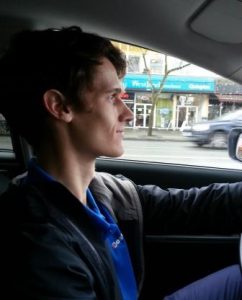 Julian was my chauffeur 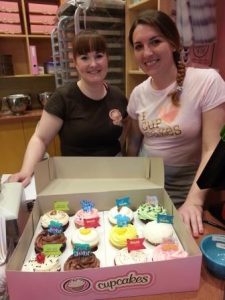 Even Vanessa and Jennifer were happy to help