For those who follow my twitter feed, @TriciaBarkerMEP, you will know I was in Seattle this past weekend helping a client complete the Seattle Half Marathon. We finished the race in fine form and had fun tweeting pics about our mascot @runspirrelrun1. 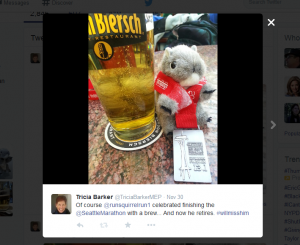 It was a joyful time with the added benefit of being in the USA on Black Friday. Yes, we planned to do some shopping.

Instead we ran smack into a Ferguson protest. I assume their plan was to disrupt the traditional tree lighting ceremony in the heart of downtown Seattle. It worked. We were on the street when the rabble took shape.

We wanted to watch the Christmas festivities, not witness an angry mob.

The police were everywhere and I noticed how calm they seemed and prepared for what might happen. As the slogan chanting started and the mass started to move it was apparent this was more about herding than stopping.

We were quickly surrounded. I wasn’t afraid or concerned but more curious. All of a sudden a huge black man was in front of me and yelled, “Stop shopping and stop shooting black people!” For once I was smart enough not to offer a glib reply to an insane comment and just turned away.

I would have taken more notice if he has yelled, “Stop shopping and do something about these people sleeping at our feet!” All around the streets of downtown Seattle were people huddled under sleeping bags and blankets and anything to block out the cold. The temperature was falling and I was shocked to see how many were still outside.

No homeless person I saw looked up at the protesters, and as far as I could see the protesters ignored the homeless. They seemed too busy with what had happened days and miles away to be concerned about the immediate tragedy.

My client and I went to dinner and put our minds to the business at hand: shopping and running a half-marathon.

That night it was easy to ignore the protestors. Today I am still thinking about those faceless, freezing souls all around us.

I will never be guilty of shooting a black man, but I am guilty of not doing anything for the people on the street that night.