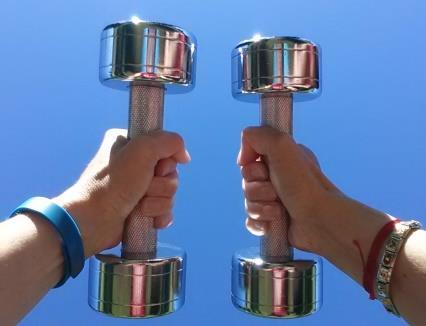 It usually comes back to the basics. No matter how much I learn about the art of personal training the main facts never change.

Get stronger, keep moving, and use your common sense.

I add the philosophy that you should start by helping your client define their own goals. It doesn’t matter what I want, it only matters what is important to them.

Once that is known there is always a way through. We just need to figure it out.

These are the foundations of my practice.

Then once every two years the business side of being a personal trainer needs attention.

I just finished my tenth re-certification to keep my credentials up to date with the International Sport Sciences Association.  I’ve been a trainer for 20 years and for the last 10 I’ve held the “Specialist in Fitness for Older Adults” accreditation.

This time I turned my attention to help people deal with Parkinson’s disease. There are books, courses and tests to complete to become a specialist in this area. As a professional you cannot venture in without the accreditation and as much medical knowledge as you can acquire. Clients need to know you have a solid background. 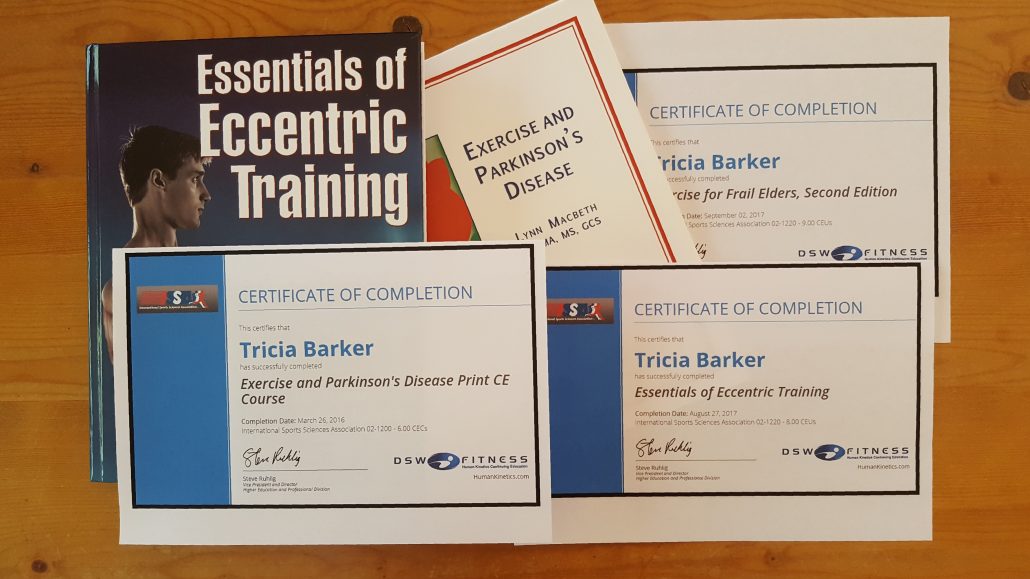 But in the end, I believe I learn more about the disease from the people that are dealing with it every day.

Each person is different. Listen to what they have to say. Then put all your resources towards making their lives better.

Luckily every certification has to include updating my CPR and First Aid. As some of my previous blogs have noted, that training has come in handy. This time around I was with a small group all attending the class for their first re-certification. I felt just a tiny bit smug when I shared that this was my tenth. I truly appreciate the updated training. This year I was reminded how lucky I am to have taken some of the courses from active firemen. Their practical added input has been invaluable. 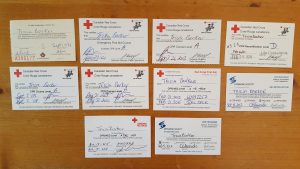 Every two years I go through this re-certification process. As someone who hates tests, I’m relieved when it’s over.

I’m happy to get back to work assisting my clients.

In the end that’s all that matters.

Eight coffee dates, too many hours of texting, emails galore, three con artists, two lovely dinners… and with that, my time on Match.com has come to an end.

The process has been priceless.

And it’s not because I found the love of my life, or even someone close.

Match.com taught me a valuable lesson that I will keep close to my heart forever.

I am surrounded by the most amazing men.

And because of this, my bar has been set very high. Some may say unrealistically high.

I’m OK with that.

I’m also happy for my friends that have found love on Match.com.

It just wasn’t for me.

As I started to chat with men looking for love on the internet I became frustrated with the lack of truly interesting characters. Lots of these fellows were decent people with good lives. There was nothing wrong with them. But there was also nothing remarkable.

The guys didn’t come close to the people that surround me every day. My clients are the standard of men you read about in hero books. Leaders who are intelligent, creative and compassionate. I’m constantly in awe that I get to spend time with them. My male friends are funny, bright and best of all; most of them are following their creative dreams and winning! The men around me set a standard that is hard to compete with. Even my god-sons are rising up and becoming the best at what they do in big ways!

I know men that are doing something positive with their time and energy. They inspire me. They motivate me. They make me laugh.

They could all be a woman’s dream partner and most already fulfill that role.

How the hell did I get so lucky to know them?

I’ve written about many of these people and their deeds, their lives and how they choose to spend their time. Most of my friends are story worthy.

I just don’t see how the normal guy on the street can compete with the men in my life.

Thanks to Match.com for this reality check.

There’s no need to settle for second best. 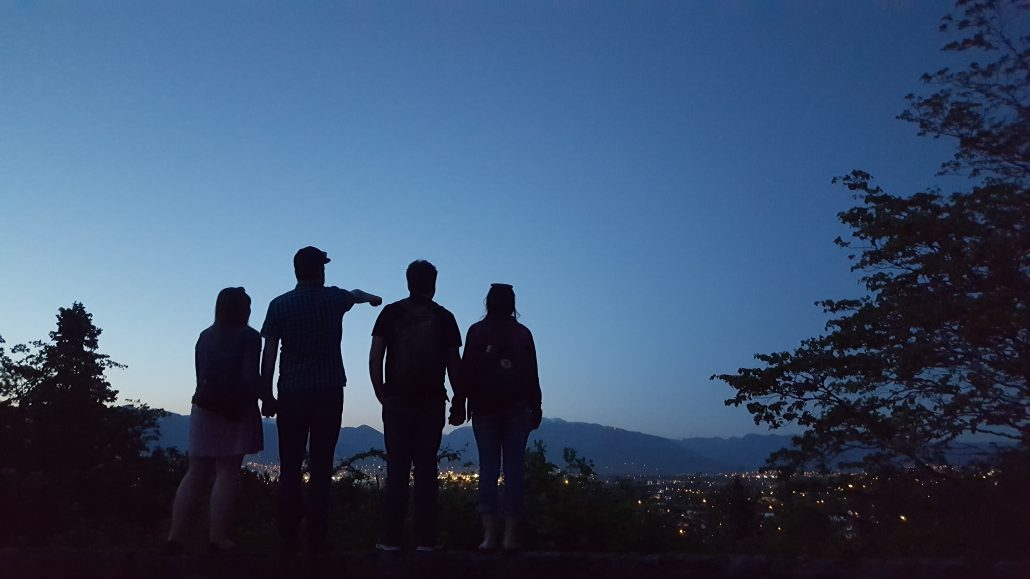 This has been a very religious week.

Yesterday I attended an Anglican memorial service for my dear client and friend, Anne Brailey. I wrote about her in a blog a few weeks ago.  Link to blog

We called each other secret sisters because our sense of humour was both alike and very inappropriate. This led to many uncontrollable fits of laughter.

Anne and I often talked about my religion and she knew I would do Buddhist prayers for her after her passing to mark the day of her predicted rebirth. She enjoyed the concept. I also told her about one of my favourite teachers, Mingyur Rinpoche. She loved that he was always laughing and looked so happy.

Anne had a soft spot for joyful people.

How interesting that this week he was teaching in Vancouver after a seven year hiatus.

I was able to attend four of Mingyur Rinpoche talks and teachings.

My weekend was a blur of his smiling face!

He recently returned from a four year retreat when he left all his worldly goods behind and led the life of a wandering yogi. He walked the walk. I highly recommend you watch some of his internet content. His practical advice on meditation is in itself enlightening. I bet he makes you laugh.

Now he is back to teaching and luckily Vancouver was one of his stops.

We met on his first visit to Vancouver back in 2001. We both looked so young! 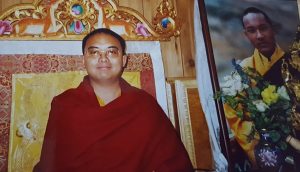 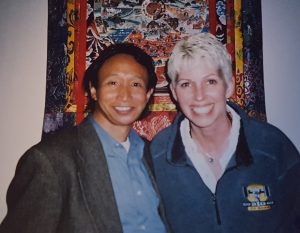 Years later he encouraged me to take a vow that I had been contemplating for a couple of years. That blessing changed the direction of my life. The vow went hand-in-hand with the work I do for my clients at the end of their lives.

And that brings me back to Anne.

On June 28th I will light a candle for her at the monastery where Mingyur Rinpoche spoke on Monday night.

In my heart I will recite one of our favourite jokes…

And we will both laugh. 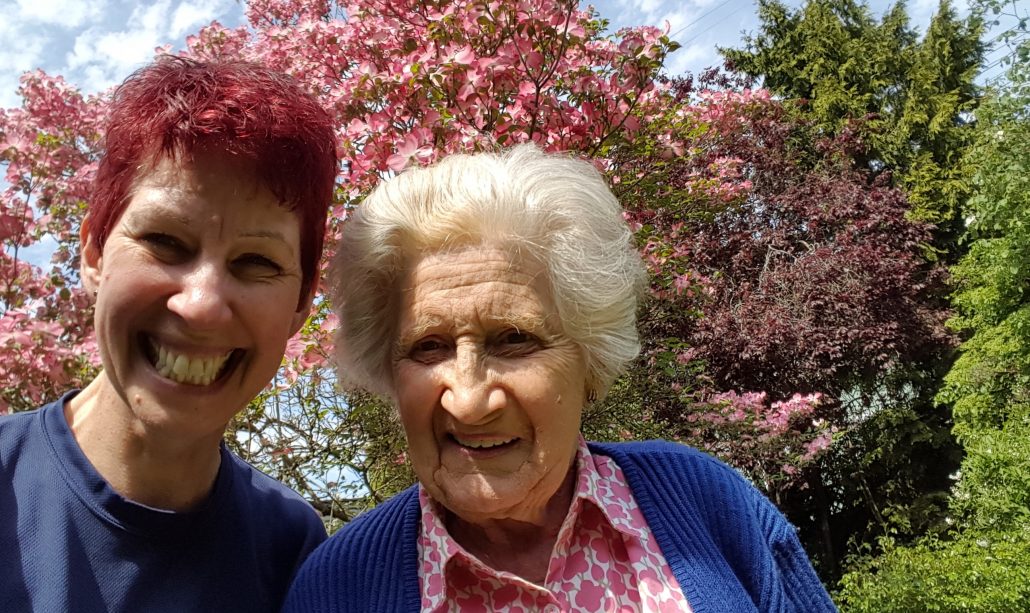 He gave me a little smile and said, “I don’t know if you’re serious or not.”

“What? Of course I’m serious! As far as I’m concerned, we’re going to compete and probably win a gold medal at the next Winter Olympics.”

Then I gave my classic, disbelieving, shake of the head. I do this to show how offended I am when someone questions my intent. I use it often.

His wife said, “And that’s why your company is called Go Big Or Go Home?”

I’ve only known him for 4 months. He’s a new client, 83 years old, with Parkinson’s. My job is to make him stronger. We’re getting there… slowly.

Pretty early on I added in this idea of the Olympics. Everyone needs a goal. Why not aim for an Olympic Gold medal?

I thought the two-man bobsled was our obvious sport. He said we should ski. I told him that is ridiculous since it’s a solo sport AND I don’t know how to ski. He just shrugged his shoulders.

I pushed for the bobsled idea. He said I was an idiot.

It is our on-going conversation.

I will not give up. We’re doing the bobsled.

“We can get Brad Fay to interview us. He’s the big Sportsnet Olympic host! He follows me on Twitter. We’ll be fantastic on TV.”

At our next workout session he tells me I’m delusional.

But my history has told me that dreams do come true.

The trick is to aim high. Know what you want. Work hard. And throw in a little good karma.

Then sit back and appreciate the journey.

Many people spent this past week talking about Mohamed Ali. They spoke about his courage and how he battled against this debilitating disease. The grace in how he handled his decline.

I spend two hours a week with someone still waging the war. Every day he must fight to move. To me he’s a hero in how he handles himself with grace and a stubborn resilience. He does not give up and pushes when all hope is draining away. What more defines an Olympian than that?

I bet there are people all around you that are fighting. Some are winning, some are just hanging on.

And some are thinking about a gold medal. 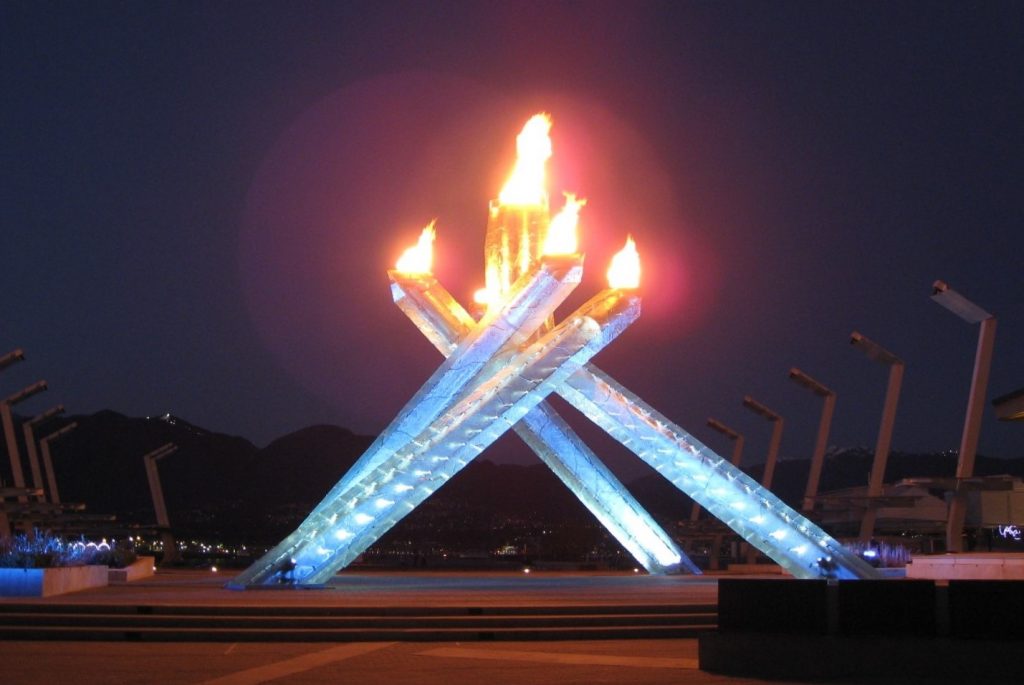 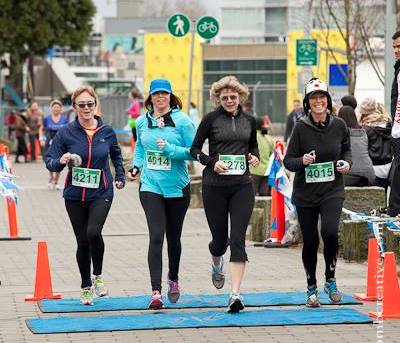 What makes a good personal trainer?

It’s what I was asked when I told a friend I wanted to hire a personal trainer for myself.

Life’s gotten crazy busy and showing up for weight training is easier if you’ve booked a specific time with someone. A ready-made incentive. It’s all about that commitment thing.

Years ago I hired a trainer and he was good. Really good. In fact he was so good he left Vancouver and got a job training Farah Fawcett. I do know he enjoyed training her more than me. Yes… hard to believe, but true.

The bottom line is a personal trainer has to be certified. That is a given. You need credentials.

What people might not know is there are different types of certifications from different governing bodies. I’m certified with the International Sports Sciences Association out of California. They fit the philosophy and style of training I wanted to pursue. So far, so good.

But no amount of certificates or credited courses or years in the business will make you a great trainer. Sure, it all helps, but I believe there is only one deciding factor.

A great personal trainer has to care about their client.

It took me years to embrace this concept but once I did my business started to really grow. I made the decision to only work with people I liked. That way it was easy to care about them. And when I cared about them I genuinely wanted them to be happier. I was much more motivated to help them reach their specific goals.

And trust me… everyone has different goals. You have to find out what they are.

When I take on a client I end up spending hours and hours with them. Life is just better when you are with people you like and appreciate.

And as much as you think you can fake caring about a client, in the end it doesn’t work. At least it hasn’t for me.

The guy who left me for Farrah Fawcett? I always got the feeling he enjoyed my company. Yes, I bitched when he had me do too many squats, but we laughed the whole time. When he told me he was leaving for LA he seemed sad to go. He said he would miss our sessions. I believed him.

And because I felt he cared, I did squats to make him proud.

Everyone ends up happy.

So will I get a great personal trainer to help me get into better shape?

Maybe the bigger question is…

How can you tell if someone really cares?

Maybe it’s the person that will be with you at the finish line? 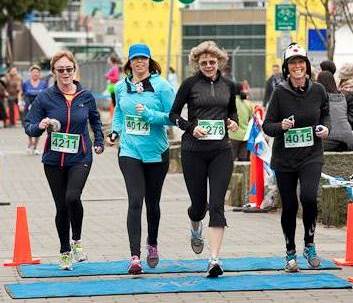