Is the opposite of kindness an unkindness? I had not thought about the word until Craig Ferguson mentioned it on his show… it’s haunted me ever since.

Last evening, I stood with a friend up near Queen Elizabeth Park in Vancouver and the nightly parade of crows started to fly over us. We just watched. Even though we had seen them many times the eerie feeling was disconcerting.

Hundreds of crow all flying in one direction. Seemingly on a quest. The occasional “caw.”

I asked if she knew about the ravens. She guessed I would have something strange to say.

That’s what a group of them is called. I believe there is something perfect about the description. Not that I think ravens are unkind, but the word makes you want to know more. Why unkindness? What did they do?

And I get the feeling it will not make any sense.

Like a “murder of crows.” Yes, crows murder things but so do kittens. And we call them a “kindle of kittens.” This seems unfair to the crows.

Crows have also been at the birth of every Dalai Lama. Take that and file it into your memory bank. We need to stop being so judgmental. And furthermore, I like crows.

Try this; say these words and see if your voice goes a little spooky, “An unkindness of ravens.”

Now say it again with a smile on your face… I bet you can’t. 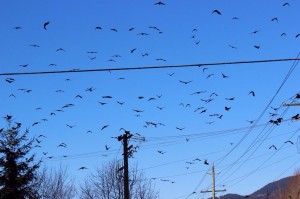