My Sunday morning was going to include a walk along the old railway tracks in search of some history. A souvenir. I wanted a spike. Loose ones were hard to find so I was prepared for a long trek. The land that makes up the Arbutus Corridor had been sold and the railway was being removed.

My quest would start where I’ve walked for years. The short distance between 33rdth and 37th in Kerrisdale. The route follows alongside Quilchena Cresent’s back alley. It’s secluded and offers some amazing views. 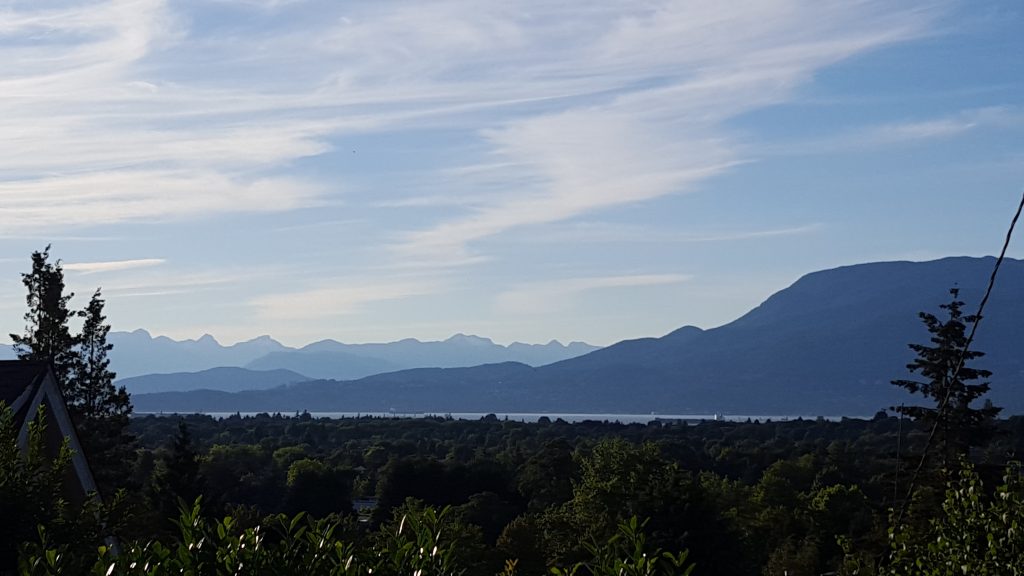 I didn’t expect to find a naked woman sprawled across the tracks and a photographer perched above her. He took a shot then looked my way. I hurried past and told her not to get arrested. She shrugged. Of course I angled my phone to capture a picture as I walked away.

Then just around the bend I spotted a huge yellow excavator. The dismantling had begun. 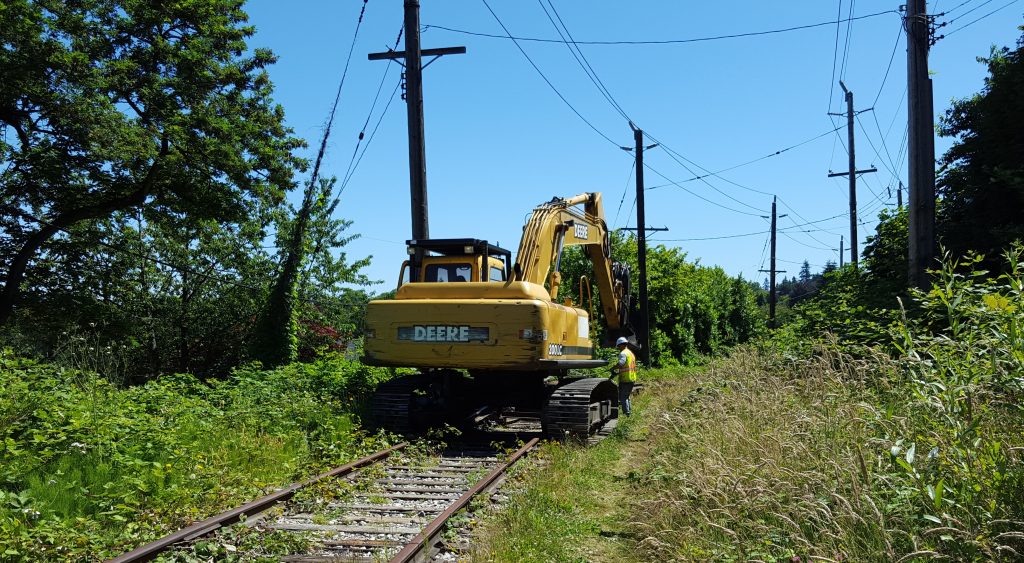 History was being unmade.

Kerrisdale is my home and the only reason it exists was the train stop at 41st. In 1905, the Railway manager, R.H. Sterling, asked Mrs. William McKinnon to name the station. She was from Kerrysdale near Gairloch, Scotland and suggested “Kerry’s Dale”, which quickly became Kerrisdale. I love that my home is named after a place in the Scottish Highlands. It makes me smile.

Remnants of the station still remain at the original intersection. 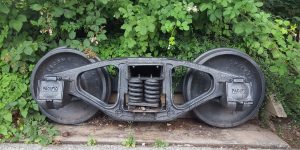 Years ago, someone hung a bundle of white Christmas lights on top of one of the power poles between the alley and the track. When you’re very young and out for an evening adventure the glow was magical. We always said that fairies played there and the lights were their home. Years later I found out Kerrydale means “little seat of the fairies.”

No wonder I wanted to steal a piece of this place. And I wanted to find a spike close to where the fairies lived. I still believe in the magic. 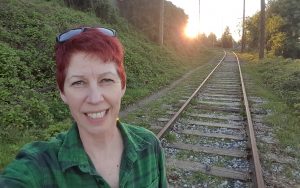 The rest of my day was spent watching the rails being pulled off the ties. The contraption underneath the excavator forced the rails up and pried the spikes free. Every few feet massive nuts had to be unscrewed and sometimes even the sledgehammer came into play. The process was much quicker than you would expect.

To stand near the tracks and be so close to the process was exhilarating. The sound. The vibration. The destruction. Here’s a little taste of what would happen…

A few hours later and they were done. 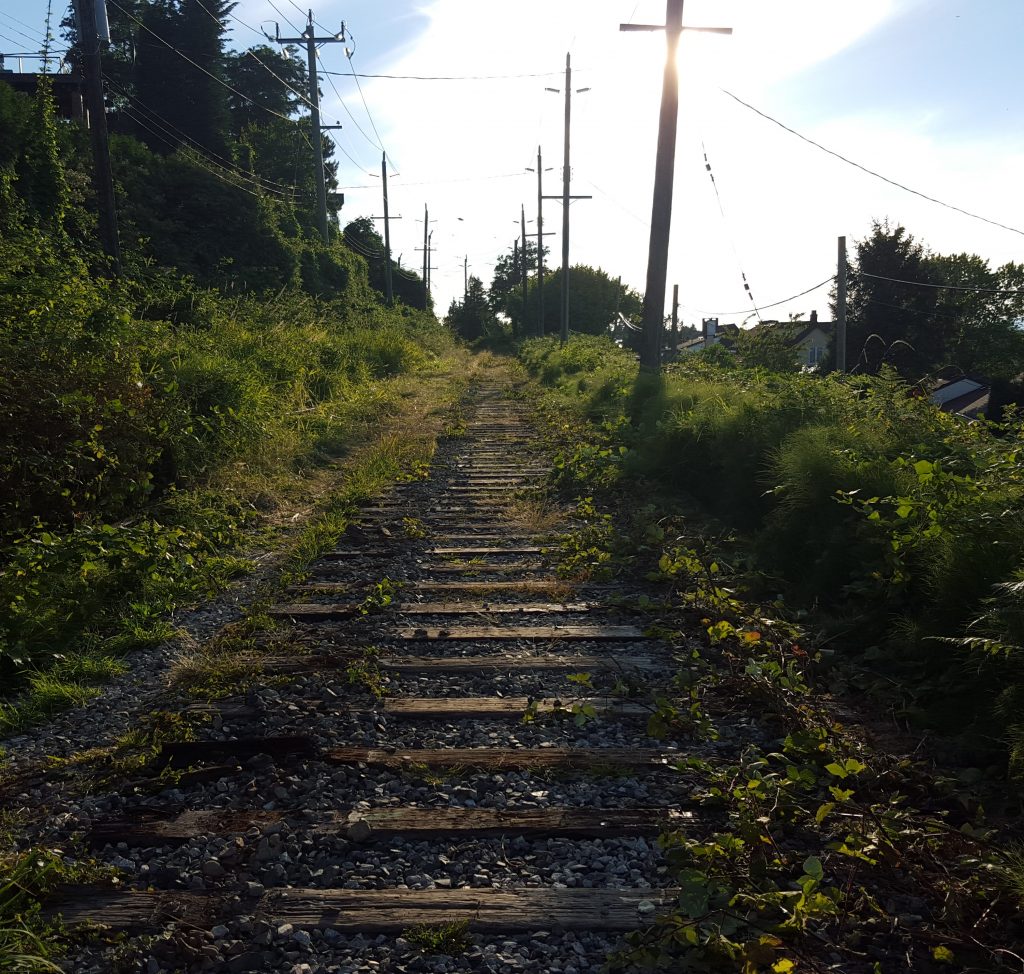 I’m not good with change so this morning’s walk along the same route made me sad.

All the ties had been removed and the rail remnants hauled away. The nostalgia was gone. I can already imagine the walkers and bikes and noise. 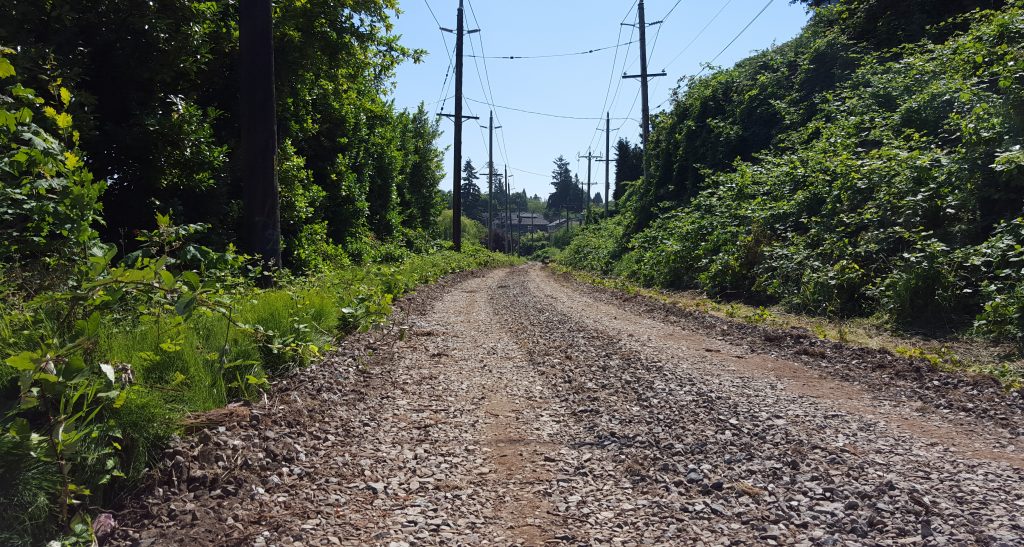 Everyone will love this path… but the fairies will not be seen again.

Maybe their spirit will live in this rusty old spike? 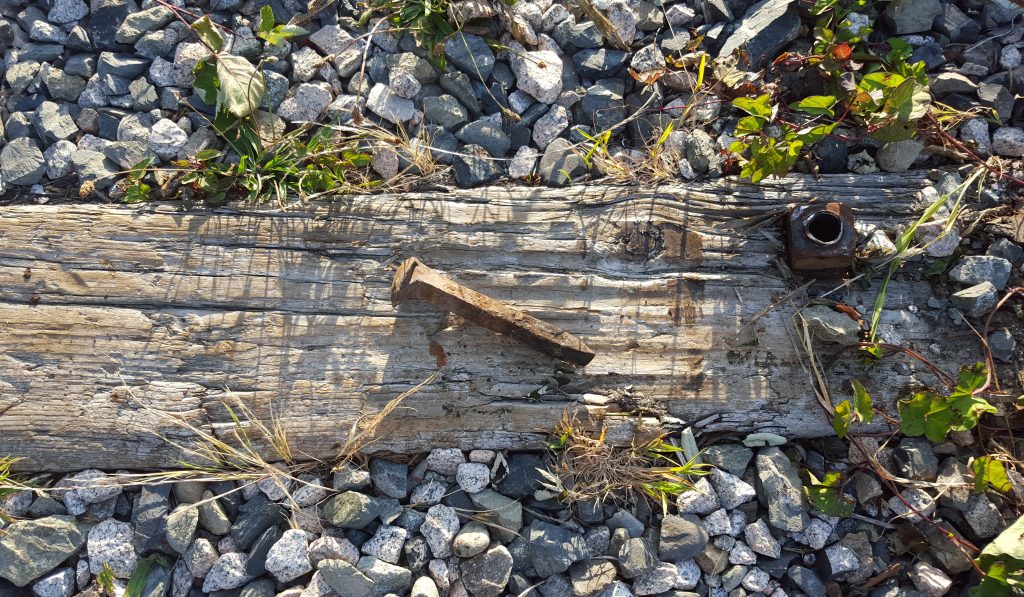 Special thanks to Corey and Curtis for indulging me as they worked. 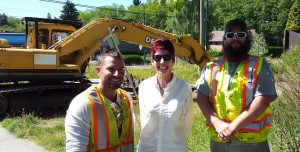 And as for that naked woman… did you really have to do this? 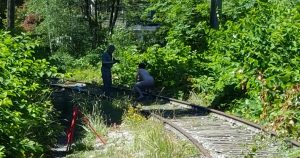 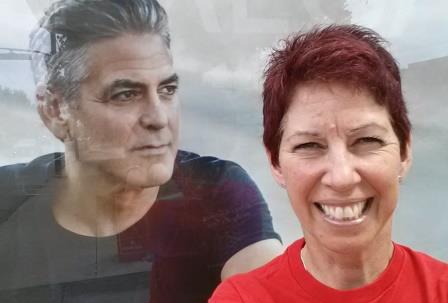 Years ago I realized my dream wasn’t going to come true and I wasn’t marrying George Clooney. Being George’s wife would have made me happy but he married someone else. I was left to find other ways to be content. 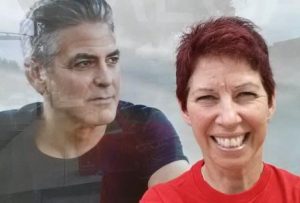 When I hear a local news report about how Vancouver real estate prices have become too high for most people I scream at the radio… “And I’m not Mrs. Clooney!”

Suck it up people… sometimes dreams don’t come true. Just because you want something doesn’t mean it will happen. Vancouver doesn’t owe you.

And guess what, owning a home doesn’t guarantee you will be happy.

I know lots of people that own homes and are stuck in a job they hate because they need the money to pay their mortgage. Or they’re trapped in a relationship and can’t leave because they would have to downgrade their lifestyle.

No, owning a home does not equal happy. It might, but it might not. And are you prepared for that? Sink all your money into this one dream only to find out it isn’t the golden ticket.

I got over the George thing.

But I also got over the home ownership thing.

I left a high-paying stressful job for a career that I love. It doesn’t make me enough money to buy a home. I gave up trying to make relationships work and opted to live contently alone. A single income is not great when applying for a mortgage.

Part of my happiness is because I live in the best place on earth. Vancouver.

I was born here, lived a few other places and then came home.

A day in Vancouver is better than almost anywhere else. 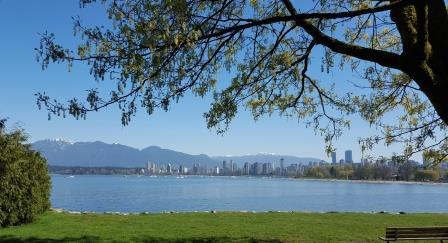 You can complain all you want about the high cost of living and the fact that you can’t buy a home. And I really hope they find a way to solve some of these issues. But this isn’t “breaking news”. And even a minor fix to the problem won’t help the “poor” people.

It would be nice if we all got what we wanted… but that’s not going to happen.

And yet I’m still happy. 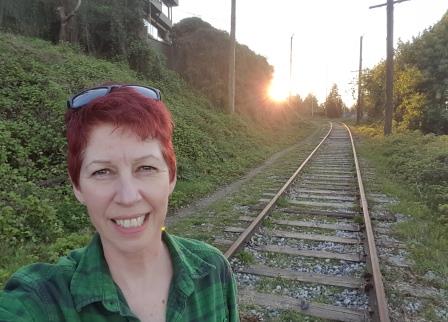